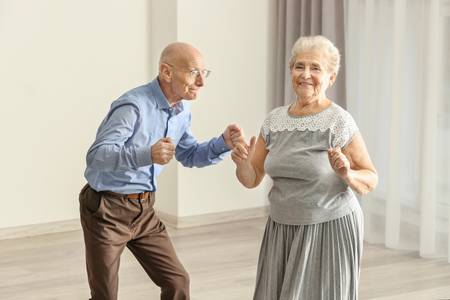 Can You Improve Your Memory on the Dance Floor?

If you like to tango, cha-cha, salsa, swing, or foxtrot, here’s more reason to put on your dancing shoes: Dancing may be good for the brain, according to a study from Germany in Frontiers in Human Neuroscience.

Researchers divided healthy seniors, ages 63 and older, into two training groups for 18 months: Half engaged in a special dance program that required continually learning challenging new routines; the other half did aerobic fitness workouts, along with strength and flexibility training—repetitive activities that did not require new learning. Classes were held twice a week for six months, then once a week for the next 12 months.

As seen on MRIs, both groups had increases in gray matter in the hippocampus (which is involved in learning, long-term memory, and spatial navigation), but the dancers had increases in more parts of this brain structure and also had significant improvements in overall balance.

Atrophy in the hippocampus occurs not just in Alzheimer’s disease but also, to a lesser degree, in normal aging, especially after age 70. But interestingly, this is one of the brain areas known to generate new neurons throughout life in response to physical and mental challenges, a process known as neuroplasticity.

The authors concluded that “the additional challenges involved in our dance program, namely cognitive and sensorimotor stimulation, induced extra hippocampus volume changes in addition to those attributable to physical fitness alone.”